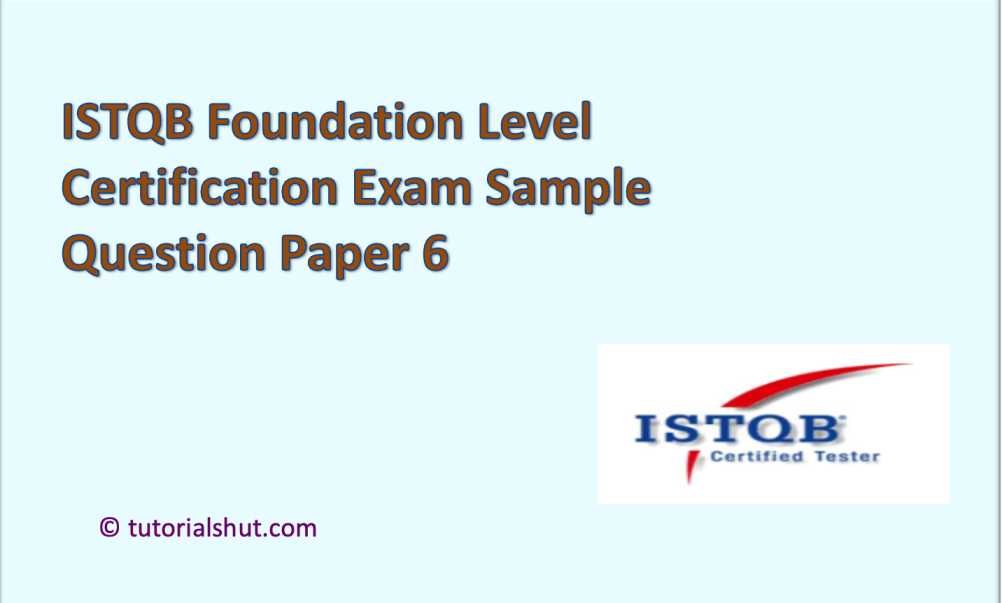 This page has ISTQB sample paper which gives you better understanding of how question paper is framed.

A. Implementation and execution.

B. Planning and control.

Q. 3: Which of the following is TRUE?

C. Confirmation testing and Regression testing are both testing to establish whether any defects have been introduced as a result of changes.

D. Confirmation testing and Regression testing are both testing fixes to a set of defects.

Q. 4: Which of the following are characteristic of regression testing?

i) Regression testing is run ONLY once

ii) Regression testing is used after fixes have been made

Q. 6: Which of the following is not a major task of Exit criteria?

A. Checking test logs against the exit criteria specified in test planning.

B. Logging the outcome of test execution.

Q. 7: Which of the following is true about Formal Review or Inspection:-

i. Led by Trained Moderator (not the author).

A. ii is true and i,iii,iv are false

B. i,iii,iv are true and ii is false

C. i,iii,iv are false and ii is true

D. iii is true and i ,ii,iv are false

A. A set of test cases for testing classes of objects

B. An input or output range of values such that only one value in the range becomes a test case

C. An input or output range of values such that each value in the range becomes a test case

D. An input or output range of values such that every tenth value in the range becomes a test case.

Q. 9: Which of the following is not a part of the Test Implementation and Execution Phase

A. Creating test suites from the test cases

B. Executing test cases either manually or by using test execution tools

Q. 10: Who are the persons involved in a Formal Review :-

B. i,ii,iii are true and iv is false.

C. ii,iii,iv are true and i is false.

Q. 11: Which of the following statements regarding static testing is false:

A. Static testing requires the running of tests through the code

C. Static testing includes techniques such as reviews and inspections

D. Static testing can give measurements such as cyclomatic complexity

Q.12: Designing the test environment set-up and identifying any required infrastructure and tools are a part of which phase

A. Test Implementation and execution

B. Test Analysis and Design

Q. 13: A Project risk includes which of the following :

D. Software that does not perform its intended functions

Q. 14: Which of the following techniques is NOT a White box technique?

A. Statement Testing and coverage

B. Decision Testing and coverage

C. All of the above

D. None of the above

Q. 16: What type of tools to be used for Regression Testing

Q. 17: System Integration testing should be done after

Q. 18: Tool which stores requirement statements, check for consistency and allow requirements to be prioritized and enable individual tests to be traceable to requirements, functions and features.

Q. 19: Statement Coverage will not check for the following.

Q. 20: One Key reason why developers have difficulty testing their own work is :

A. Lack of technical documentation

B. Lack of test tools on the market for developers

A. Is not important

B. Increases as we move the product towards live use

C. Decreases as we move the product towards live use

D. Is more expensive if found in requirements than functional design

E. Can never be determined

Q. 22: When a new testing tool is purchased, it should be used first by:

A. A small team to establish the best way to use the tool

B. Everyone who may eventually have some use for the tool

D. The managers to see what projects it should be used in

E. The vendor contractor to write the initial scripts

Q. 23: Which of the following is NOT a black box technique:

Q. 24: Success Factors for a review include:

i. Each Review does not have a predefined objective

iv. There is an emphasis on learning and process improvement.

A. ii,iii,iv are correct and i is incorrect

A. Statement coverage is 4

B. Statement coverage is 1

A. Independent testers are much more qualified than Developers

B. Independent testers see other and different defects and are unbiased.

Q. 27: Evaluating testability of the requirements and system are a part of which phase:-

A. Test Analysis and Design

B. Test Planning and control

Q. 28: Which of the following will be the best definition for Testing:

A. The goal / purpose of testing is to demonstrate that the program works.

B. The purpose of testing is to demonstrate that the program is defect free.

C. The purpose of testing is to demonstrate that the program does what it is supposed to do.

D. Testing is executing Software for the purpose of finding defects.

Q. 29: Which of the following statements is true of static analysis:

A. Compiling code is not a form of static analysis.

B. Static analysis need not be performed before imperative code is executed.

C. Static analysis can find faults that are hard to find with dynamic testing.

D. Extensive static analysis will not be needed if white- Box testing is to be performed.

Q. 30: Which of the following is a Key Characteristics of Walk Through

Q. 31: A software model that can’t be used in functional testing

Q. 32: Find the correct flow of the phases of a formal review

Q. 33: Which is not the testing objectives

B. Gaining confidence about the level of quality and providing information

Q. 34: Maintenance releases and technical assistance centers are examples of which of the following costs of quality?

Q. 35: Typical defects that are easier to find in reviews than in dynamic testing are:

A. Deviations from standards,

E. All of the above.

D. None of the above

Q. 37: Which of these are objectives for software testing?

A. Determine the productivity of programmers

B. Eliminate the need for future program maintenance

C. Eliminate every error prior to release

A. Incorrect program behaviour due to a fault in the program

B. Bug found before product Release

Q. 39: Which one of the following are non-functional testing methods?

A. Done by the Developer

B. Done by the Test Engineers

D. Done by an Entity Outside the Project’s sphere of influence