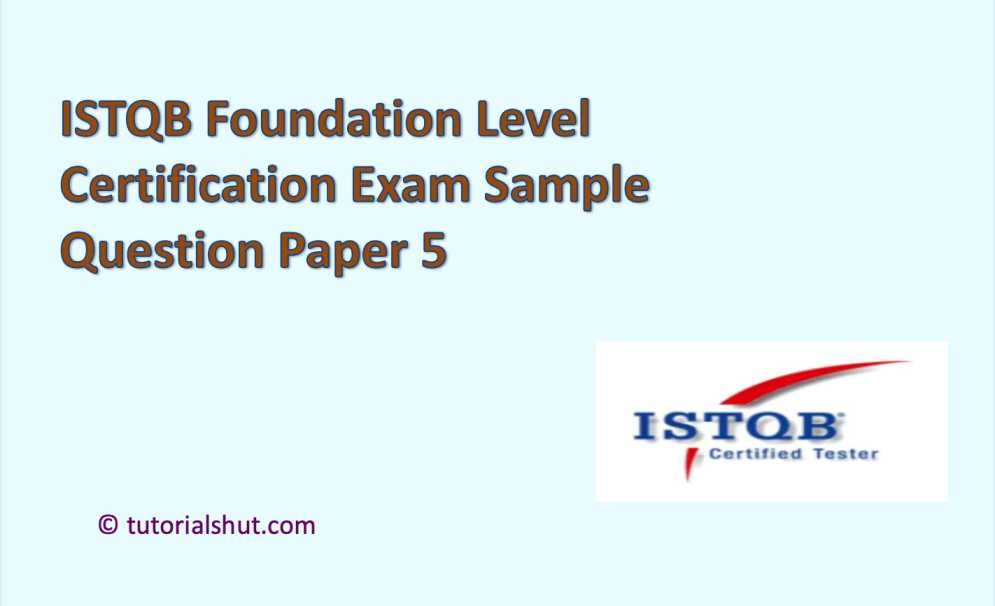 This page has ISTQB sample paper which gives you better understanding of how question paper is framed.

Q. 3: Given the following fragment of code, how many tests are required
for 100% decision coverage?

Q. 4: Which of the following are characteristic of regression testing ?

Q. 5: Which of  the  problems  below  BEST  characterize  a  result of
software  failure?

Q. 6: Which of the following activities should be performed during the
selection and implementation of a testing tool?

i) Investigate the organisation’s test process.
ii) Conduct a proof of concept.
iii) Implement the selected tool on a project behind schedule to save time.
iv) Identify coaching and mentoring requirements for the use of the selected
tool.
Options:
A. i, ii, iii.
B. ii, iii, iv.
C. i, iii, iv.
D. i, ii, iv.

1.Decision Table Testing
2.Decision Testing
3.State Transition Testing
4.Exploratory Testing
W. Testing carried out w boxes to achieve specific test objectives, possibly to
complement structured testing.
X. A test technique used which may be used to verify different system re
depending on current conditions or previous history.
Y. A test technique which combines combinations of inputs that might not
otherwise have been exercised during testing.
Z. A form of control flow testing based on decision outcomes.
Options:

Q. 9: Given the following code, which is true:

Q. 11: Given the following code, which is true about the minimum
number of test cases required for full statement and branch coverage:
Read P
Read Q
IF P+Q > 100 THEN
Print “Large”
ENDIF
If P > 50 THEN
Print “P Large”
ENDIF

A. Attend a tool exhibition
B. Invite a vendor to give a demo
C. Analyse your needs and requirements
D. Find out what your budget would be for the tool
E. Search the internet

Q. 17: Which of the following is true

A. What is selected for testing
B. Objectives and results
C. Expected results
D. Targets and misses

Q. 19: Features  to be  tested,  approach  refinements  and  feature  pass
/ fail  criteria  BUT  excluding  environmental  needs  should  be
specified  in which  document?

Q. 20: You have been testing software that will be used to track credit
card purchases. You have found a defect that causes the system to
crash, but only if a person has made and voided 10 purchases in a row.
What is the proper priority and severity rating for this defect?

Q. 21:Which of the following is a benefit of static analysis?

A. Defects can be identified that might not be caught by dynamic testing
B. Early defect identification requires less documentation
C. Early execution of the code provides a gauge of code quality
D. Tools are not needed because reviews are used instead of executing
code

Q. 22: Which of the following is an example of a good exit criterion from
system testing?
A. All tests should be completed
B. The project budget should be spent
C. All defects should be fixed
D. All severity 1 defects must be resolved

A. Testing performed by potential customers at the developers location.

Q. 26: Which of the following CORRECTLY matches the roles and
responsibilities in a formal review?
A. Manager – Decides on the execution of reviews
B. Review Leader – Ensures effective running of review meetings
C. Scribe – Fixes defects in the work product under review
D. Moderator – Monitors ongoing cost-effectiveness

Q. 28: Which test design technique relies heavily on
prior thorough knowledge of the system?

Q. 29: What is the main difference between static and dynamic testing?

Q. 30: If a review session is led by the author of the work product, what
type of review is it?
A. Ad hoc
B. Walkthrough
C. Inspection
D. Audit

Q. 31: You are preparing for a review of a mobile application that will
allow users to transfer money between bank accounts from different
banks. Security is a concern with this application and the previous
version of this application had numerous security vulnerabilities (some of which
were found by hackers). It is very important that this doesn’t happen
again.
Given this information, what type of review technique would be most
appropriate?

Q. 32: Which of the following is an experience-based testing technique?

Q. 33: As a result of risk analysis, more testing is being directed to those
areas of the system under test where initial testing found more defects
than average.
Which of the following testing principles is being applied?

A. Beware of the pesticide paradox
B. Testing is context dependent
C. Absence-of-errors is a fallacy
D. Defects cluster together

Q. 34: Which of the following is an example of a failure in a car cruise
control system?

A. The developer of the system forgot to rename variables after a cut-and-
paste operation
B. Unnecessary code that sounds an alarm when reversing was included in
the system
C. The system stops maintaining a set speed when the radio volume is
increased or decreased
D. The design specification for the system wrongly states speeds

Q. 37: You are performing system testing of a train reservation system.
Based on the test cases performed, you have noticed that the system
occasionally reports that no trains are available, although this should
actually be the case. You have provided the developers with a summary
of the defect and the version of the tested system. They recognize the
urgency of the defect and are now waiting for you to provide further
details.
In addition to the information already provided, the following additional
information is given:
1. Degree of impact (severity) of the defect
2. Identification of the test item
3. Details of the test environment
4. Urgency/priority to fix
5. Actual results
6. Reference to test case specification
Which of this information is most useful to include in the defect report?

Q. 40: Which of the following is a benefit of test independence?

A. Testers have different biases than developers
B. Testers are isolated from the development team
C. Testers lack information about the test object
D. Testers will accept responsibility for quality

Answers for above questions:

To apply and appear for exam refer link