Between 2006-2007, Sun Microsystem released java along with source code under GNU licence as an open source software.

Currently all rights of java are sold to Oracle from Sun Microsystem though open source versions of java is available and the latest stable java version is java 15.

It was released with the promise of write once, run anywhere (WORA) which means once a program is written the same can be executed on windows or MAC or Linux without any change.

Naming convention J2 later was changed to J so J2SE changed to JSE, J2EE to JEE and J2ME to JME.

1) Object oriented – Java is an object oriented programming language which means that any real life object is represented by java class and object.

These real-world objects can be represented by java objects and required behaviour and attributes can be defined.

In the following chapters, we will cover object-oriented principles in detail, then you will understand the true meaning of it.

2) Platform Independent and simple – Java is a platform independent language that means we can write a java program once and run in different machines and architecture.

Example: If we write java program in windows, the same program can be executed in a MAC or Linux system without any change. 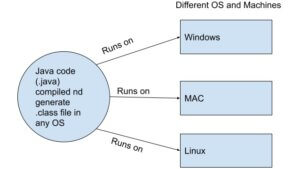 Once java code written and class file generate, it can run anywhere in any another machine or OS.

3) Secure – Java provides robust security features and it is very difficult to corrupt or hack.

5) Multithreaded – Java gives the ability to program multithreaded applications which means within a program or process you can run smaller tasks in parallel to get high performance.

6) Dynamic – Java can change its behaviour and determine many aspects of a program while execution.

Below softwares are needed:

1) A computer with any OS windows, MAC or Linux.

3) Any editor software, it can be simple notepad or IDE (Integrated Development Environment)

Next Topics to Go Through

In the coming chapters, you may go through key components of java JDK, JRE and JVM.